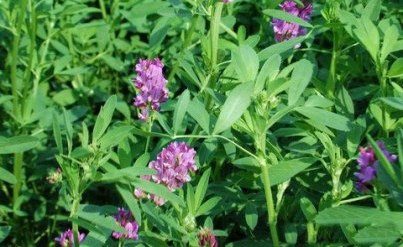 In this next couple of posts I will be looking at some very useful teas and ferments used in biodynamic farming.

Also known as Medicago sativa or alfalfa, Lucerne is a wonderful legume as it binds nitrogen and is a wonderfully rich food to help breed up protozoa, which in turn is one of the earthworms’ favourite foods. Protozoa will also keep the bacteria numbers in check.

How is it made?

Use approximately 500gm of fresh Lucerne, chopped finely (it is vital that the Lucerne is untreated and chemical-free) and add it to a 20 litre drum or bucket. Add approximately 300ml of microbial food – I use 100ml of molasses and 200m of fish emulsion (seagro, kelp, fulvic acids). If you have comfrey leaves this can also be added and will be a wonderful addition. Aerate for 24 to 36 hours – The idea is that you are looking for nice fine bubbles and to create aerobic conditions to ensure the proliferation of the Protozoa. The mixture is then ready to be applied direct to the soil where it is needed. If you are spraying it on please remember to screen the coarse material out to avoid blockages.

Why is it used?

Lucerne Tea is applied to orchards and vineyards as a general tonic and to boost the earthworm population. The protozoa in the tea make it a fantastic food source for earthworms, which are vital for good soil health and aeration.

The following description by GJ van Tonder really sums up the complex relationship of what’s going on in the soils and specifically where this type of tea can help with the nitrogen cycle:

“Soil bacteria have a carbon to nitrogen ratio of about 5 to 1 which means that their body consists of 17% nitrogen. A good soil contains 2 500 kg of these creatures per hectare so they can conceivably hold the equivalent of about 900 kg of nitrogen locked up in their bodies and unavailable for plant growth. The trick is to keep these creatures recycling their nitrogen and that involves other members of the soil food web. The chief role of protozoa in your soil, for example, is to keep bacteria numbers in check and to recycle nitrogen from bacteria to plants. One protozoa eats 10 000 bacteria each day. A protozoa has a carbon to nitrogen ratio of 30 to 1 so it needs to eat 6 bacteria with a 5 to 1 ratio to satisfy its carbon requirements. However it only needs one of the six units of nitrogen it has just absorbed so it exudes the extra 5 units back into the soil in the form of natural ammonium nitrogen for plants to utilise. In this manner your nitrogen is constantly recycled. If you have knocked out your protozoa, then you will be spending more on nitrogen than you need.”

Use as a soil drench or folia spray; we tend to spray on to the soils or add to our irrigation water.