What, and Why Biodynamic Preparation BD503? 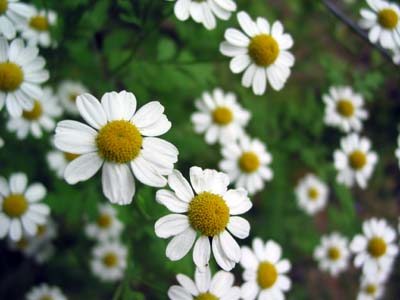 Following on from my last article on BD502, Yarrow preparation, I am looking at BD503, also known as Camomile preparation, the next compost preparations.

BD503, known as Camomile Preparation is a concentrated compound made from German Camomile or Matricuria Chamomilla. This particular species can be identified by cutting open the cone at the back of the flower to reveal a hollow space. A solid cone indicates Egyptian  (Matricaria Recutita) or Roman Camomile (Chamaemelum Nobile), which is not suitable. The plants grow in autumn and winter and are harvested in late spring and early summer.

How is BD503 preparation made?

Picking of the flowers:

The best time to collect the flowers of the Camomile is early summer and early in the morning before 10h00, when the petals are horizontal. If you go in too early you might have an issue with dew and hence moisture, which is not ideal. Only collect young flowers; you will notice that the young flowers have a light green centre. If the contents of the cone are yellow, or dry, the flower is too mature and should not be used. To make it a little easier use a comb to scoop up the small green flowers.

It is extremely important to dry the flowers properly! The flowers need to be dried gently on a drying rack or fruit rack covered with hessian or mesh. They should be kept out of the sunlight in a dry shady spot and turned/tossed every day until all the moisture has gone, and they are crisp yet smell fresh.

If any dampness remains, mould will grow and the flowers will decompose and be useless for making the BD503. The flowers can then be stored in a paper bag or glass jar in a well-ventilated cupboard until needed.

The preparation should be made in the autumn, by placing the dried flowers in the intestine of a cow. It is very important to ensure that a synthetic substitute is not used. We get ours from the butcher or abattoir and it requires only a cursory clean to remove any remaining undigested matter. Start with a 30-40cm length piece, knotted at one end and use a large funnel to squeeze the flowers in before knotting the other end with a piece of sting. The flowers should not be too compressed.

The stuffed intestine can then be buried in the same way as Horn Manure (BD500), in other words in autumn on a root day. There are, however, some precautions to be taken with BD503 Camomile Preparation:

We like to put the sausage-like preparation in between unglazed terracotta pots filled with good soil.  Place two pots head to head, and mark the area well. The unglazed pots allow the energies to influence and infuse into the preparation but at the same time when we come to lift the preparation we know exactly where it should be.

We lift the preparation in spring but the other tricky part of the process is deciding exactly when to lift the preparation. It must spend long enough buried that it resembles dense humus, but if left too long, the earthworms will have had a feast and nothing will be left!

The preparation can now be stored until needed in the same way as BD 500 is stored.

Human beings have long since used Camomile to aid digestion and relax the soul. It was also used to preserve meat before the advent of refrigeration.

In biodynamic farming, Camomile reduces ammonia in the soil, breaks down organic matter to stabilise nitrogen and increases calcium to create a rich stable humus that increases the health of the soil.

In my next article I will continue to explore the Compost Preparations, and will focus on BD504 Stinging Nettle Preparation– how it is prepared, and why it is used in biodynamic farming.