What, and Why Biodynamic Preparation BD502? 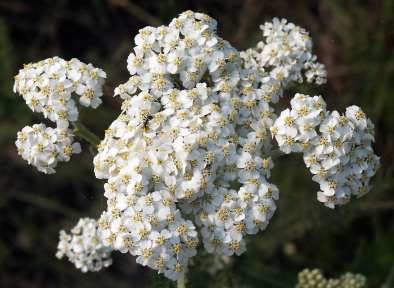 BD502, known as Yarrow preparation is a concentrated compost preparation made from the tiny heads of yarrow flowers (stalks removed), which are packed into a stag’s bladder in early summer. The bladder is sewn shut and is then hung above head height in the sun for the summer. It is advisable to protect the bladder from birds – we wrap ours in cotton socks.

In autumn the bladder is taken down and buried in fertile soil where it remains for the winter, before being removed the following spring. Once again look at protecting the preparation from worms etc. whilst it is buried, potentially sewing it in to a nylon gauze pouch.  The preparation  is then removed from the bladder and stored for use.

Like BD500, BD502 is part of the lime grouping. It works with sulphur, potassium and fluid flow, recycling urea into protein, and has a good relationship with copper. We use BD502 to make the soil more stable and open to energies.

The yarrow plant is made up of many tiny flowers combined to make a large flower head. The yarrow plant is related to Venus, and therefore connects with light energies. It is very high in sulphur, which stimulates and detoxes the soil, opening it up and allowing energies to flow. Sulphur after all is the real catalyst for organic chemistry.

Whilst fresh yarrow flowers are the most preferred option, dried flowers can be rehydrated and used.

In humans, yarrow stimulates the glands within the skin as well as the functions of the kidneys and the bladder. In the soil yarrow is connected to the planter rhythms of Venus, which are similar to the ecological activities of purification as are the kidneys and bladder in humans and animals.

The big question is how do we preserve the substance that has all the great qualities of the blossom of yarrow? Naturally these forces change from the flower either to humus or into seed and ultimately life but we need to work out how to preserve this before it changes. So with this in mind let’s explain the reasoning behind using a stag’s bladder.

Why a Stag’s  Bladder?

Firstly plants do not necessarily have the connection to the cosmic forces, they come from the plant kingdom and we need to tap into the animal kingdom to get this higher level and relationship with the astral influences. The plant is influenced from the surface in whereas the animal is inflicted by the astral forces and specifically creating organs that create the living animal.

A stag’s bladder is used because of the function of the bladder within the animal; its function is one of purification and specifically excreting concentrated forces. A bladder is used for its detoxing and cleaning ability.

In the Northern Hemisphere a stag’s bladder is most commonly used. Here in South Africa we choose to use the bladder of a kudu. I love the idea of the vortex like shape of the kudu horns. We’ve discussed why we use the bladder but not why a stag’s bladder! A  stag/kudu is an animal that has an incredible affinity for the astral side of life. Specifically they are very nervous, nimble and light on their feet. They are the complete opposite of cows for example. Their horns act as a satellite grid for catching energies, a spiral vortex linking to the galaxy. Once again focusing the astral forces through their living organs and what better organ than the bladder to excrete these influences on this preparation.

Hanging high all summer the bladder and its yarrow contents are exposed to the atmosphere and the energies and influences of light, all the while being focused by the bladder In essence an outside light process is being inverted to being an inner process, something quite different and new.

Autumn sees the slowing down of activity above ground, and the energies begin to recede and focus in the earth. At this stage the bladder is buried for the winter months in a well-marked spot in fertile soil. At this time the preparation is exposed to the chemical and life activities of the soil.

The following spring the humus-like yarrow preparation is removed from the soil,  and stored to be used in our compost production when we produce Cow Pat Pit (CPP).

It helps open up the soil by combining the ultimate catalyst of sulphur with other elements. It works on the outer edges, has a great relationship with zinc and copper as well as the recycling of urea.

When this preparation is used in conjunction with the other preparations in compost production and Cow Pat Pit, we get all the various relationships working properly and ultimately this is applied to the soils.