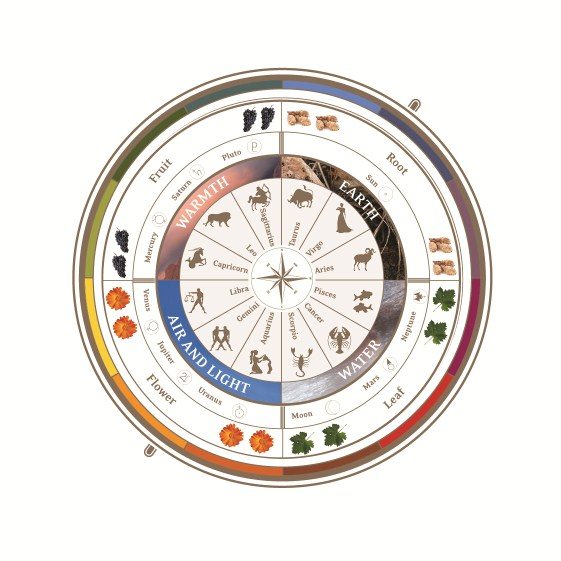 At Avondale, we have been working according to the biodynamic lunar calendar for many years.  So when we introduced the idea of the Luna Taste Test, we had a good idea of what the outcomes would be.  That said, it was a lot of fun for us to put our necks out and work with a panel of non-believers, even sceptics, to put the lunar calendar to the taste test.

The first tasting, which fell on a Fruit day on the lunar calendar, was really just a straightforward wine-tasting evening.  However, things got exciting at the second tasting, which happened to be on a Leaf day, when there was discernible shock on the faces of our panellists, some of whom could not believe they were tasting the same wines.   For me, it was incredible to witness their realisation that there might well be something to the theory that the phase of the moon could influence the taste of a wine.  It brought out that romantic side of wine – that it is a special ‘living’ product, not something that should ever be mass-produced and factory-driven.

As the Luna Taste Test progressed through the ‘blind’ Root and Flower days, it also became interesting to note that throughout the four tastings our panellists unanimously agreed on the main characteristics that showed up in the wines on particular days.   There wasn’t a dissenting voice in the room; everyone could identify the same main difference.  The result was that we saw non-believers go through a kind of conversion experience, so that they could more seriously entertain the idea that cosmic energies and influences have an impact on the production and taste of wine.  Both locally and internationally, there is an increasing interest in the role of biodynamics in wine production, and the Luna Taste Test brought the values and principles of this nature-friendly way of farming to the fore.

Here’s what our panellists had to say in their own words:

“Although the wines displayed a thread of opulence and clarity of fruit (testament to their origin) over the course of the four tastings, the variation that was detected by a largely unanimous panel in the different cycles was baffling, but also enlightening. It will be interesting to monitor variations of this nature with non-biodynamic wines.”  Higgo Jacobs

“I’m really not into any kind of green/organic/bunny-hugging winemaking stuff – I just like good wines. So it was quite a shock to realise how much better the wines were on certain days for no real reason other than the green/organic/bunny-hugging one of reacting to the different phases of the moon. Honestly – I didn’t think this was going to work and when it did, I had absolutely no idea it would be so dramatic and defined. I am definitely checking the days I taste on the biodynamic calendar now, especially when I’m asked to review a wine, to try and taste it on the best day possible to give it the fairest chance. Oh and – of course – give me the greatest chance of enjoying it too!”  Cathy Marston Food 24

“Before the Luna Taste Test I was very much aware of biodynamic farming and what it entails.  To say I was a sceptic about the more esoteric parts of the movement would be putting it mildly. However, having tasted the Avondale wines on the different days of the lunar calendar and seeing how very different they were really opened my eyes to the realities of biodynamics.  Jonathan’s explanation of the scientific principles also increased my understanding.  My scepticism if something of the past, that’s for sure!” Hennie Coetzee blog link

“Wine never ceases to amaze but I have to confess to arriving somewhat sceptical at Avondale’s Luna Taste Test only to discover that wine can indeed jump over the moon. I was left with 3 major impressions and 1 obligation: the Luna calendar (although its not just the moon’s influence) can affect both style and quality; the unanimous agreement among the panel; I now regularly check the Luna calendar which brings me to the obligation – to spread its gospel.”  Jonathan Snashall blog link